So let’s see how a single card performed independently in a basic system. The following tests were run on a PC with 64-bit Windows 10 on an AMD A10-7870K Radeon R7 with 4GB of GDDR5 RAM and a solid state drive. Such specs let the card be the independent variable in the performance tests. This system also uses a dual monitor setup through the card, as well as a total of 6 fans at 4W fans for internal airflow.

For this test we will be using the Uningine Benchmark and I’ll host some videos of the footage for your enjoyment! So what is Unigine? Simply put, it is benchmark software that renders multiple levels of loads based on your initial setting to the things being interacted with in the environment, things such as shadow rendering can cause graphics to slow because of the extra global opacity of different levels based on countless objects and their collective shadows merging. The motion of individual objects, as well as how many, can affect FPS drastically depending on memory and rendering efficiency of multiple objects in synchronization.

The Uningine software uses the room above to simulate all forms of tests including the aforementioned shader quality as well object motion and load based on the “antigravity” feature of the room. In the video review below, I give a demonstration and observe some shader limitations when stacking objects together and intercepting their shadows; some edging is a little weird as well, but those are small details I can’t help but notice. 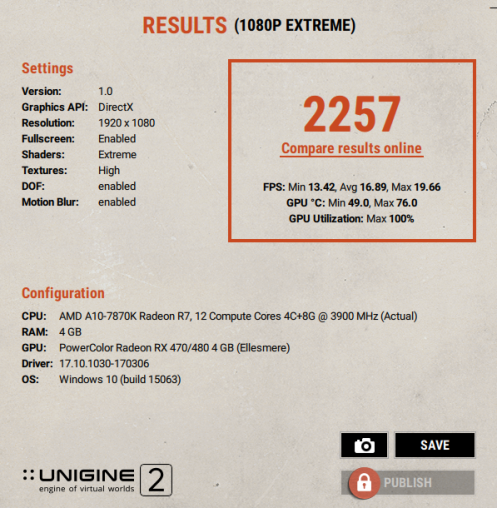 All features, including particles and shaders, were set to the highest level. The results were consistently smooth video, though the addition of screen recording did show plenty of lag time. Of course, one of the issues with many mid-ranged graphics cards is limitations on simultaneous input and output bandwidth of the internal components, so having a recording overlay did and always will reduce the results (especially since I was already pushing the card to the limits with the settings).

The score served a smooth 2257 for the RX570. Although this won’t compete with top-end hardware with multiple cards and more graphic heavy configurations, it’s a respectable score. Here’s a higher spec example of a higher end card in comparison to the extreme shaders of the Red Devil. 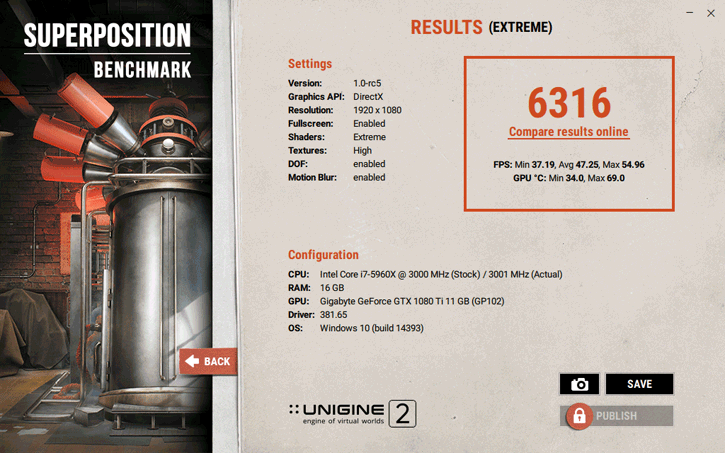 Here’s a higher spec example of a higher end card in comparison to the extreme shaders of the Red Devil.

Apart from the extreme test with an average of 17 FPS and max temperature of 76, the medium test (more comparable to playing League of Legends on Extreme settings) produced a more consistent and smoother score at 7442. 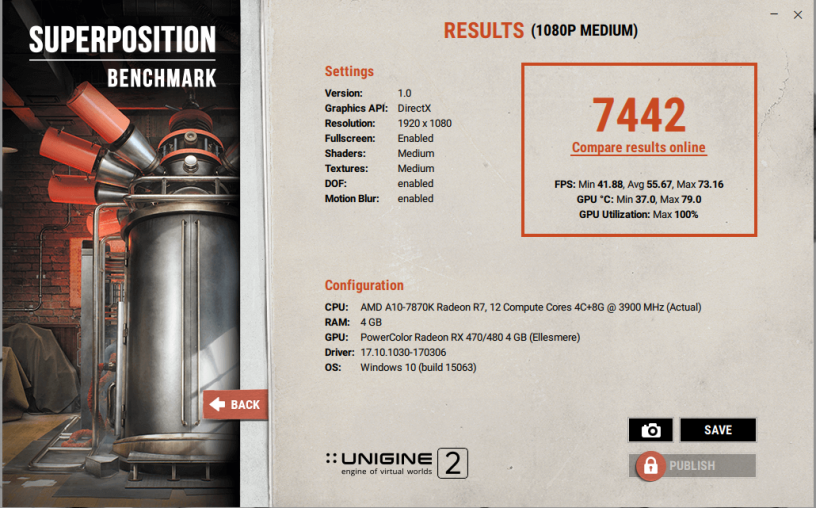 So now lets sum everything up…