2011 is proving to be an exciting year for electronics innovation. This year Intel has released a new family of visually smart 32nm processors, ATI launched the 6000 series of its graphics card line-up, AMD launched its Llano APU and is set to premiere Bulldozer, HP released – then stopped production of it’s touchpad tablets, and cell phones went 3D.  In all the chaos of new world records sometimes the most important players on the team are less recognized.  The modern motherboard has been pulling together components and peripherals for over 3 decades – playing an important roll as the spine of the modern day computer system. All the major manufacturers are constantly bringing new motherboards with oodles of features and ports for your expansion desires. One major player in the motherboard race is ASRock.  Over the course of the last 4 years ASRock has matured into a company capable of providing some of the best constructed and fully equipped motherboards on the market. With the release of Intel’s Z68 chipset, a combination of the best offerings from the P67 and H67 chipsets along with some excellent additions, motherboards now offer so many features and choices it can be difficult to pick the right foundation for your Intel based system. The ASRock Z68 Extreme7 Gen3 Intel Motherboard is packed full of performance and functionality to enable high-power computing and to fully unleash the potential of the latest processors, video cards, storage, and, power efficiency technologies. 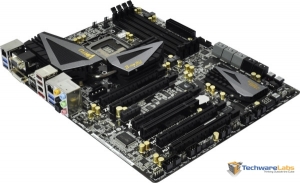 The packaging of ASRock motherboards is great.  The box quenches your thirst  for features and specifications whilst providing a sturdy transportation container for the moderately priced $275 component. Inside the main display shell are two boxes.  One contains the motherboard with plastic viewing window and the other box contains the bundled accessory items. ASRock includes the quick install guide, software setup guide, driver CD, I/O backplate, 6 x SATA cables, and 2 x Molex to SATA power connectors. Enough cables and connectors to get you up and running right away and still expand your storage options at a later date.  In addition to the standard goodies also included are:  a 3.5mm audio cable, a 3.5 slot 2 port USB 3.0 front panel, 2 port USB 3.0 rear panel, 3-Way SLI bridge, 2-Way SLI bridge, and 2 port USB 2.0 + PS/2 header panel. It is great to see that ASRock provides the PS/2 header port as many motherboard that lack  onboard PS/2 port(s) simple think you do not want or need the PS/2 port and neglect to include this extra – Good job ASRock. Hint: this board supports dual VGA cards at PCI-E x16/x16 speeds and three VGA cards at x16 / x8 / x8 speeds, hench the 2 and 3-Way SLI bridges! Join us as we explore the ample features and functionality of this ASRock Z68 Extreme7 Gen3 Intel Motherboard.