Sapphire, the leading producer of AMD based hardware, has sent us their new Radeon HD 6570.  The 6570 is an unusual product centered in the middle of the road for performance. Who will this card appeal to and why would you want to purchase such a card?  The 6570 from sapphire is further complicated by its mediocre 512MB of GDDR5 memory in a market saturated with 1GB+ video cards. How much will this affect its performance in games and regular desktop use?  Features wise the 6570 comes equipped with everything AMD fans have become familiar with:

Before we delve into the card and attempt to answer these questions, lets see Sapphires’ take on the addition to their line of video cards.

The AMD Radeon™ HD 6570 graphics processors offer advanced video and display features, as well as 2nd generation support for DirectX 11 to offer the ultimate in versatility for the everyday computing desktop.

Translation: While the box may mention gaming Sapphire has taken the stance that the card is aimed squarely at the “everyday computing desktop“. Of course Sapphire also mentions in the same sentence the support for DX11.  Is Sapphire thinking about the inclusion of support for DX11 in Windows 8, you can bet they are.

When we received this, we were quite surprised with what we received.   We did not receive a massive video card with case-clearance issues or a card requiring more power than the Hubble Telescope.  We received a simple card measuring 16 cm long  with a 8 cm fan requiring no external power supply.  This is further proof that Sapphires’ aim was integration of this card into the mainstream desktop. Bring DX11 support and modest 3D capabilities to the everyday computer without burning out power supplies or increasing heat output substantially. That’s a pretty big feat for Sapphire to think they can do with the 6570. Our first impression was “This  card, retailing at ~$79.00, will never be able to keep up with HD gaming and video”, as the box boasts.  Lets continue to see if my initial assumptions are correct.

As you can see from our earlier description this card requires no additional PCI-E power cables as it draws all its power from the PCI-E bus. As a result we can safely expect two things: 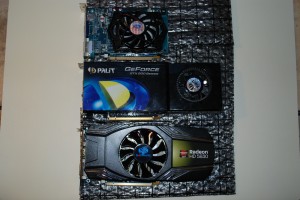 Looking at the photo above you can see just how diminutive this card really is.  The Sapphire 6570 is just dwarfed by both the 5830 and the GTX 280.  Oddly enough the 6570 takes up two slots with its dual brackets but this is due to the Arctic Cooling heatsink.

Arctic Cooling has partnered with Sapphire for the cooling solution used for the 6570 and in this case the 6570 employs a fully aluminum heatsink, no heatpipes, and a larger than average fan for the size of the video card. This leads us to believe the choice was made to help keep pricing down, and you have to agree at $79.99 the 6570 is a very low priced card for its array of features. Arctic Cooling is a well known brand for heatsinks and as such we can expect the 6570 will run nicely in whatever environment it finds a home in.