Anyone can build “the ultimate gaming PC”,with enough cash. It’s just a matter of finding the highest-end parts you can, surfing over to your favorite parts retailer’s website, and mortgaging an arm, a leg, and both kidneys. A more interesting challenge is trying to build a gaming PC with budget constraints. Building a PC for $750, that will handle the latest games is somewhat more difficult. You have to make hard decisions about the critical components: video card, motherboard, RAM, and CPU.

In an effort to make the CPU part of the decision a bit easier, AMD offers a broad selection of CPUs, most in the sub-$200 range. Clocking in at $119 MSRP, the Athlon II X4 645 code named “Propus” promises an improvement on the already solid performance of the X4 640, at a price just over half of Intel’s nearest equivalent, the i5 750. Stick with us while we put this processor through its paces.

This processor along with several others will be released by AMD this week. Prices and figures are as below:

So far, this is all looking very familiar. The only notable change from the X4 640, so far, is the 100mhz speed bump. Of course, we’ll be taking a much closer look in the following pages.

Testing was done on the following system:

Here’s all the nitty-gritty details about the CPU, courtesy of CPUID’s CPU-Z 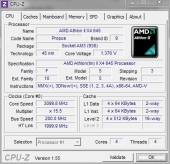