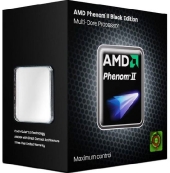 Introduction: It’s got how many cores?

AMD just released a slew of new chips to fill in some gaps in their current line-up. Here today we have the fastest of this release, the AMD Phenom II x6 1075T 3.0GHz. This beast sits in between the existing 1055T and 1090T. This gives AMD three consumer level 6 core processors while Intel has none. And to top it all off, AMD has set these all under $300, so you can get those i7 speeds at i5 prices.

Just like the other 6-cores, the 1075T sports AMD’s new Turbo CORE system. This system is similar to Intel’s Turbo boost system, only a little bit different. With Intel’s Turbo Boost, when the processor is running below optimal power thresholds the processor will overclock 1-4 of the 4 cores to get the job done faster. AMD’s system is a little more straight forward: If the task is better suited to raw speed over multiple cores, the processor will switch from 6 cores to 3 turbocharged cores. The 1075T can go from 3.0GHz to 3.5GHz, making it one fast processor. 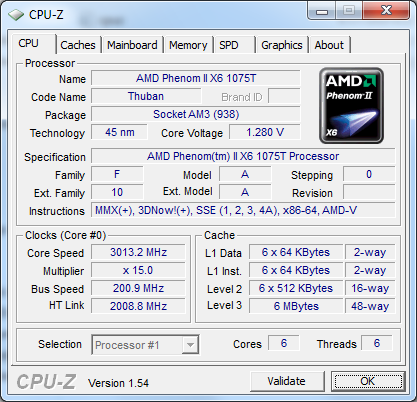 Earlier this year AMD released their first Thuban products, the Phenom II x6 1090T and the 1055T. These are the industries first 6-core consumer level processors. Also new with Thuban is the aforementioned Turbo CORE system to compete against Intel’s own turbo system. The 6 cores also come equipped with 6MB of L3 cache which is 2MB less than Intel’s lineup. This difference is most likely due to cost. Another cost saving statistic is AMD choice to continue with their 45nm production process. Since AMD doesn’t have to factor much miniaturization research into their prices, you get to save money.

Take note that we do not optimize our systems for the best results. We pair our review items with fair components. Sometimes they are faster than what is common, but we do try to be fair. This example is much closer to a common build. For comparison, run these benchmarks on your own machine at home.