Insurance claims data in the NFPA 70B maintenance standard shows that roughly half of the cost associated with electrical failures could be prevented by regular maintenance. A study published in IEEE 493-1997 says that a poorly maintained system can attribute 49 % of its failures to lack of maintenance. To determine the cost of a failure, it helps to consider three key categories:

• Cost of labor to troubleshoot, patch, clean up, repair and restart

• Cost of damaged equipment and materials, including repairs, replacements and scrapped material. To calculate power quality costs and potential savings at your facility, reference the online calculator at www.fluke.com/pqcalculator.

Unlike a comprehensive electrical system survey, predictive maintenance power quality focuses on a small set of measurements that can predict power distribution or critical load failures. By checking the power quality at critical loads, you see the effect of the electrical system up to the load. Your predictive maintenance inspection route probably already includes any motors, generators, pumps, A/C units, fans, gearboxes, or chillers on site. Voltage stability, harmonic distortion, and unbalance are good indicators of load and distribution system health and can be taken and recorded quickly with little incremental labor. Current measurements can identify changes in the way the load is drawing. All of these measurements can be taken without halting operations and generate numbers that can easily be entered into maintenance software and plotted over time. For each measurement point or piece of equipment, determine what limit should trigger corrective action. Limits should be set well below the point of failure, and as time goes on limits may be “tightened” or “loosened” by analyzing historical data. The appropriate limits depend somewhat on the ability of your loads to deal with power variation. But for most equipment, your maintenance team can devise a set of default, “house limits” based on industry standards and experience. The cost of three-phase power analyzers is lower now than ever and it should only take roughly 15 minutes to take the readings discussed in this article. (Storing voltage sag data will add more time, since it requires picking up the data after a day or so.)

• Running loads at overly high or low voltages causes reliability problems and failures. Verify that line voltage is within 10 % of the nameplate rating.

• As connections in your system deteriorate, the rising impedance will cause “insulation resistance drops” in voltage. Added loads, especially those with high inrush, will also cause voltage decline over time. The loads farthest from the service entrance or transformer will show the lowest voltage. 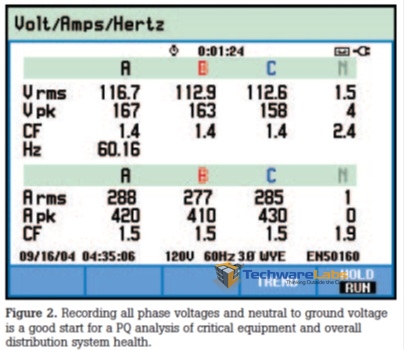 Taking a single voltage reading tells only part of the story. How is the voltage changing during an hour? During a day? Sags, swells and transients are short-term variations in voltage. The voltage sag (or dip) is the most common and troublesome variety. Sags indicate that a system is having trouble responding to load requirements and significant sags can interrupt production. Voltage sags can cause spurious resets on electronic equipment such as computers or controllers, and sag on one phase can cause the other two to overcompensate, potentially tripping the circuit. Sags have several dimensions: depth, duration, and time of day. Utilities use a special index to track the number of sags that occur over a period of time. To gauge the depth of the sags, they count how often voltage drops below various thresholds. The longer and larger the voltage variations, the more likely equipments are to malfunction. For example, the Information Technology Industry Council (ITIC) curve specifies that 120 V computer equipment should be able to run as long as voltage does not drop below 96 V for more than 10 seconds or below 84 V for more than 0.5 seconds.

Current measurements that trend upward are a key indicator of a problem or degradation in your load. While equipment is running, monitor phase, neutral and ground current over time. Make sure none of the currents are increasing significantly, verify that they’re less than the nameplate rating, and keep an eye out for high neutral current, which can indicate harmonics and unbalance.

In a three-phase system, significant differences in phase voltage indicate a problem with the system or a defect in a load.

• Using a power quality analyzer to do the math, high percentages indicate high unbalance. EN 50160 requires Vneg to be less than two percent.

Harmonic distortion is a normal consequence of a power system supplying electronic loads such as computers, business machines, electronic lighting ballasts, and control systems. Adding or removing loads from the system changes the amount of distortion, so it’s a good idea to regularly check harmonics. Harmonics cause heating and reduced life in motor windings and transformers, excessive neutral current, increased susceptibility to voltage sags, and reduced transformer efficiency. As current harmonics interact with impedance, they’re converted into voltage harmonics. Total Harmonic Distortion (THD) is a sum of the contributions of all harmonics. By tracking Voltage THD over time you can determine if distortion is changing. For voltage harmonics, IEEE 519 recommends less than 5 % THD. 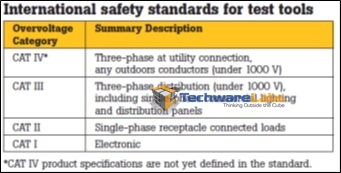 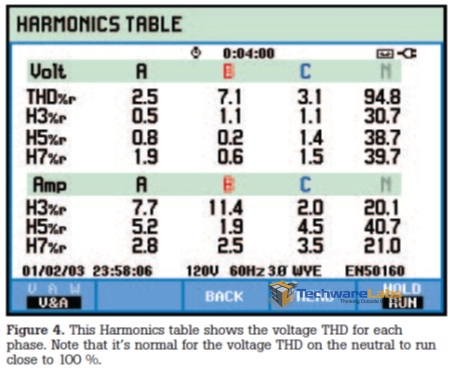