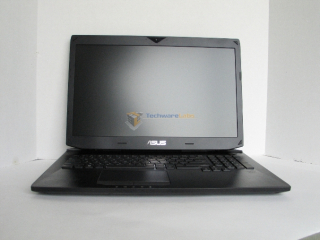 Overall, the G750 feels thinner and lighter than the G75, without losing a bit of sturdiness. As far as software goes, there isn’t much to say here that hasn’t already been said before. It’s running Windows 8, and the pack-in software hasn’t changed significantly. One change that can have a major impact is the addition of the Geforce Experience software to the graphics drivers. It amounts to a fairly exhaustive list of performance profiles for various games, tested across Nvidia’s lineup from the 400 series onward. If a game is on the supported list, the Geforce Experience software can provide a custom graphics preset that should provide as much eye candy as possible while maintaining a steady framerate. It doesn’t quite manage the best possible balance for every system; factors like RAM speed and capacity, storage speed and system load can all adversely affect performance. For those who just want to get a quick approximation of playable settings, though, it can save a lot of time. For the tweakers, the Geforce optimized settings can provide a useful starting point for further fine-tuning. One of the main tradeoffs made to lower the price with this model is the absence of a SSD, and the loss is keenly felt. Even lightweight applications take several seconds to launch, and putting the system to sleep can take over a minute in some cases.

Futuremark’s new benchmarks take a different approach from their previous efforts. Rather than running one benchmark intended to cover all uses, they have a number of different benchmark suites tailored to different scenarios. For this machine, we chose the two most relevant benchmarks, the Creative suite and the Storage suite.

Of the comprehensive suites, the Creative suite offered the greatest strain one could expect to see on the system during normal use. Web browsing performance seemed alright, though there was some noticable choppiness during the group video chat tests.

The Storage suite focuses in on the system’s main storage, which is often the limiting factor in overall system responsiveness. As you might expect, performance here was relatively weak, due to the 5400RPM hard drive.