Sony, the company responsible for the world’s first 4K theater projector is at it again. At this year’s press conference they unveiled the world’s first consumer 4K projector. They even managed to pull out Will Smith and the director of the upcoming movie “Men In Black 3.”

Sony also unveiled an update to their Handycam and Bloggie line of camcorders. They now feature a floating lens design called “Balanced Optical Steady Shot.” This will help keep videos steady when you’re free shooting video. Another neat feature is an embedded projector in the camcorder. This makes it super easy to share video with friends and family. The embedded projector can throw an image up to 100 feet in size.

Sony of course was showing off their new portable gaming console, the Playstation Vita, but that’s not the really cool part. What is cool is Sony’s effort to create an ecosystem for all of your Sony products. Sony is moving towards a single sign on approach that will enable you to search for and download media to any of your Sony devices (PS3, tablet, PS Vita, etc). It will also make sharing media between all of the devices that much easier.

Closing out the press conference, Sony brought out Kelly Clarkson to perform. Sony has their hand in everything from electronics to music and this press conference proved a good reminder of just how many things they have their hands in.

Below is the gallery of the rest of the pictures taken at the press conference. 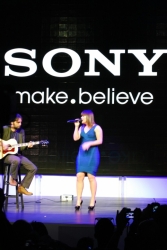