For as long as I’ve been aware of thermal cameras I have wanted one. In addition to being a really cool piece of technology it is uber useful. In my work at TechwareLabs.com we review a LOT of hardware, pretty much anything that uses electricity. That means heat, and at times quite a bit of it. Wouldn’t it be handy to see the heat that any given object puts off? You could isolate sources of heat and cold, find out if one part is hotter than another and get its exact temperature within 0.06 degrees C. For the more analytical among us it would be cool to see if those larger heatpipes actually convey more heat no pun intended. Introducing the E6 from Flir, a Thermal Imager for your needs.

Every now and then the tech god grants my wish and we get something really special here at TechwareLabs. Today we have a first look at the E6 from Flir. Far from a toy or random gadget this is one serious piece of hardware, and it rings in at $2,495. Get your wallets ready guys, you are going to want this in your hardware armory real soon. But first a brief history to put this into perspective.

Thermal imagers have been around for a long time. They were never what anyone except the rich would call affordable. Sporting price tags in the tens of thousands the original thermal imagers were large, had a poor battery life, and did little more than show fuzzy outlines of heat in red and blues and at a very low resolution. Large corporations and businesses purchased them for building, electrical, mechanical, and industrial analysis. Their use was a speciality and few organizations owned more than one or two due to the cost.

Fast forward to today and the story hasn’t changed much but still we have improvements. Thermal imagers are not widespread nor considered an item that most would buy. Businesses are still the primary consumers but they are gaining ground in scientific applications. The thermal sensors have improved in accuracy and efficiency leading to longer battery life and slightly better resolutions. Technology has also been develeoped that allows for the combination of thermal and standard digital images for a much clearer picture of what is being represented. Flir calls this MSX or Multi Spectral Dynamic Imaging  and we will get into that later. The best development of all is that the technology has been refined to the point that the price has come down enough to make these imagers more widely available. You can now find some basic thermal imagers in the sub $1000 range. While the features and resolution on these “cheap” thermal cameras is not nearly as robust as their higher end brethren they do allow people access to a tool that was previously inaccessible.

Please watch our short first look at the E6 from Flir. 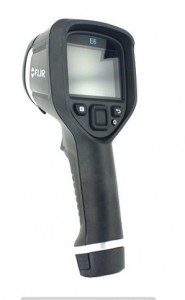