Before we dive into this product, let’s explore some use cases where this product shines. The living room is our social hot-spot, it is the center of attention for most families and most gatherings, and it’s also one of the more traveled spaces in a home. For this reason, running a cable to a laptop in order to share a display or stream a movie could be quite a problem. Running the cable across the floor creates a trip hazard, and running it up the wall would be an eye-sore, not to mention the length of cable needed could easily exceed 20 feet, making for an expensive investment.

The second scenario is in the business place, particularly the conference room, or “creative” zone. Communication is essential for businesses to remain productive. In order to communicate well, we often need to share content from either our own creation or the Internet. Now you could again, buy expensive conferencing equipment, run wires under the floor and into a table, etc. but at what cost? With the SteamHD, no wires, no mess, it’s easy to setup and just works. 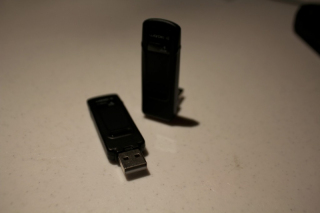 The receivers are specific, the strait one is intended to be used in the base, while the “L” receiver can pivot, and is intended for use in the side USB port on a laptop. The pivot allows you to point the receiver towards the base for better signal strength.

Setting up the SteamHD was quite frankly, easy. Everything on the unit is clearly marked and anyone who has hooked up an HDTV will have no problems with this device. It’s on the level-of-difficulty of hooking up a Playstation 3, a Blu-ray player or an Xbox 360. After hooking up the device to your display, pop in the included disk, and follow the onscreen instructions. The installation will prompt you to plug-in the receiver for your laptop or desktop, when it does connect the receiver and moments later your desktop will appear wireless on your external display. The included software is good, but not perfect. It consists of three main pieces, first a driver that allows you to talk to the USB receiver, second a virtual display driver and finally a USB audio driver. What I particularly like is that this software not proprietary, once it’s installed control of the device is handed over to Windows and can be controlled through the display and audio control panels. However, those who are unaware with said panels may find configuring their system to be a bit confusing. It should be noted that we were testing this device on a Windows 7 x64 Dell Precision M6600, a very modern professional laptop with enough system resources to well exceed the recommended specs posted by Warpia. Those specs are listed below.

Windows based PC with an available USB 2.0 Port