When is a Laptop Not a Netbook or a Notebook?

The answer is when it’s the new HP DM3 powered by AMD’s Athlon Neo processor. This 13.3 inch marvel combines properties of both a netbook and a notebook to achieve something truly remarkable. The DM3 has the thinness of a netbook, the resolution and size of an ultraportable laptop, the price of a netbook, and yet nearly the performance of a full laptop. The best thing about the DM3 . . . it does it all with HP styling. So is the DM3 the answer to consumer prayers? Should it be on your holiday wish list? Read on. . . .

As a consumer electronics and computer hardware review website we have seen and evaluated a staggering amount of hardware and I have watched trends form, companies rise and fall, companies compete for standards, and more. Over the last few years I have watched as a rather interesting trend formed. Dell, once known for amazing deals and good hardware for the price, has become less and less popular. This is due in part to the falling economy in the US, and in part to the growing interest in their own profit margin rather than the interests of their consumers. All the while HP hardware has taken up the slack and become not only better but much more stylish. It is nice to see HP innovating with laptop interfaces, designs, and refining the definition of both their laptop and desktop line.

Netbooks but not Notebooks:

Since the inception of the netbook there has been a growing need for more power in these low priced portables. There is a reason it is called a netbook and not a notebook. In general it CAN do all the things that a notebook can do, it will just take longer to do so. Quite a bit longer in some cases. This leads to a frustrating experience for many netbook owners that think that it is simply a low price laptop. The bottom line with a netbook is that with that low price come some trade offs.

So you want notebook performance and a netbook price right? HP listened and the DM3 is the answer. The DM3 comes in two flavors, blue (Intel) and Green (AMD) beyond the CPU and GPU and price the differences end. The DM3z and DM3t are named each for their respective CPU’s. You will find that the DM3t (Intel) is priced higher than its DM3z (AMD) brother even though the DM3z has arguably better performance and specifications for a $100 cheaper price. Here is the basics on their difference:

Now these are the base models.  Now while the Intel first appears to have better specifications a deeper look reveals some hidden nuggets of gold at the heart of the AMD model. First the Athlon Neo L335 is a true dual core processor similar to the SU4100 but the L335 is running at 300Mhz more per core. Secondly the ATI 3200HD graphics is superior to the Intel 4500MHD.

Let’s take a look at the DM3z-1030us model we are reviewing today:

Now this model is significantly upgraded from the base unit and still falls under $700 US. I am a firm believer that with computers and especially laptops you get the features you want and need the first time around to avoid problems later. 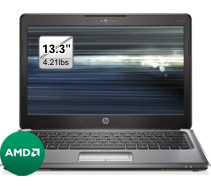