Where packaging is concerned, Jetway decided to go with a standard box though well packaged. The packaging looks to be made of recycled material for the Green conscious among us.  Inside the ION-TOP PC is well protected with 2 pieces of plastic that extend approximately an inch and a half in every direction and padded on either side by foam inserts. The peripherals, however, do not enjoy the same kind of protection. They are stored in a box that acts as a buffer between the plastic and the outer box though we do not expect that things like the remote would get damaged in normal shipping anyway.

After taking the goodies out the box, we decided to do a quick inventory of what came included with the PC. You can see all the included contents in the pictures above. Starting from the left, in the first row are the power adapter, the adapter cable, and the magnetic legs for the ION-PC. In the second row there is the manual, installation CD, batteries, and a remote control.

After taking the computer out of its plastic protection, I encountered more plastic protection. The face of the ION-TOP came covert with a protective wrap which I swiftly removed to uncover the true beauty of the front panel. On it, I discovered 2 USB ports, and SD/MS card reader port and an IR receiver. The big hole in the middle that you see in the picture is the space where you would install a slim disk drive.  When ordering from the manufacturer you can order can order the ION-TOP with their drive, however, you run the risk of not getting the drive you want. If you want a blue-ray drive, which seem to be very popular these days, then your best option would probably be to select the drive-less ION-TOP model and then pick up a slim blue-ray drive for approximately $150~200 on the internet.

As I have mentioned before, the ION-PC is a barebones system. So what exactly does that mean? This means that you are responsible for providing your own hard drive, RAM, and if you purchased the JBC230C63P-330 model instead of the JBC230C63P-330D model you would also have to get the CD Drive. That being said, Jetway does go to extreme lengths to make installation as easy and accessible as possible while keeping things nice and compact. Enthusiasts will appreciate the thumb screw side panel, and ease of access to the critical components inside. 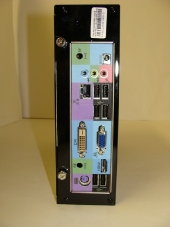 One quick look at the back of the ION-TOP and you can sense that you are looking at something special. There are most definitely more ports that you can count on both hands. The ports from the top down are as follows: 12 V DC, WiFi antenna hole, 3.5 mm Speaker/Mic, S/PDIF, DVI-D, VGA (d-Sub), HDMI, Ethernet, 6 USB, RF antenna hole,  and PS2 Keyboard. Basically it leaves the interfacing part of the setup to the end user. One thing is for sure, it will surely be difficult for a standard user to use up all these ports, especially the 8 USB ports that come attached to this board (2 front, 6 back).

Below you can see a picture of what the Jetway looks like after it has been opened and prepared for installation of our components:

Once the 2 thumb screws in the back have been taken off, the upper panel just slides off as show in the upper right picture. You are then presented with the tray which will house your hard and the slim disk drives. To install those, however, you will need to lift the tray by getting a screw driver and removing the 4 corner screws that bind it in place. Once the Tray has been removed, the motherboard and the RAM slots have been exposed as can be seen in the lower right and left pictures.

First lets take a look at the motherboard and see what we have to play with. Taking a closer look at the SATA ports I noticed that the board has the space for a total of 4 inputs. Two of these inputs are already occupied by the hard and the disk drives. The other 2 can be used, but there is not enough space to fit anything else into the case, so unless you are willing to burrow holes in the ION-TOP, these ports are to to remain unexploited.

Next to the RAM and SATA assemblies lies the processor which is passively and actively cooled by the case and CPU fans as can be seen in the pictures below.

The picture in the lower right hand corner shows the slot for a mini PCI-e card that can be bought separately. The slot can be used in conjunction with a WiFi card to enable wireless capability for the ION-TOP.