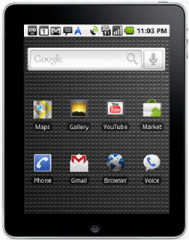 Motorola and Verizon Wireless are building a tablet computer based on Google’s Android operating system for TV consumption, according to Financial Times. The WiFi device will have a 10-inch screen gadget and Flash 10 support.

Motorola and Verizon Wireless are teaming up to build a tablet computer based on Google’s Android operating system for TV consumption.

The companies, which have enjoyed a fruitful relationship building and selling the Android-powered Droid line of smartphones, are gunning for Apple’s iPad.

The iPad sold more than 3 million units in its first three weeks, cementing the tablet as a viable alternative for or addition to PCs and laptops among consumers.

What do you think? Can Google push through the sea of iPads and release both a functional and salable device? Would you buy an Android powered tablet device?