The idea of a Home Theater PC (HTPC) has received a lot of attention recently.  Microsoft has Windows Media Center;  Apple has its Apple Tv;  Google has its Google Tv.  While these are all great takes on the HTPC concept, they lack real functionality and user customization.  May I introduce MythTv: a Unix based software with very low hardware requirements that lets you record and store on the backend then stream to any frontend wirelessly.  For those who cringe at the thought Unix, this is not the Unix of your nightmares.  Mythtv comes with a full user GUI, easy to use control panel, and little to no need for command line use.  Mythtv has the ability to stream around the network, download and store torrents, and play/rip any file type.

Mythtv is divided into two distinct parts: The Frontend and the Backend.   Both are based in Unix and can be run as a LiveCD or plain software to an existing Unix System. 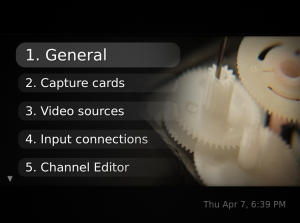 Setting up general options, input tuner cards, file locations, and channel listings is all done through the backend

The backend is a file server with a shared database containing channel listings, recordings, and movies.  The Backend and the Frontend can be run on the same computer or on different computers depending on the user’s needs.  Having a backend on its own rig has its advantages: dedicated sleep/wake reducing power consumption, having recorded content anywhere on the network (bedroom, living room, kitchen), and “out of sight out of mind.” Since the software runs off of a basic motherboard/CPU, the builder has all the options of sleep/wake times through either the motherboards real-time clock (RTC) or through Wake-on-LAN.  The great thing about this side of the Mythtv system is that it requires very little hardware demand since all the encoding is done on tuner cards.  The tuner card that you pick is going to reflect the type of encoding done, 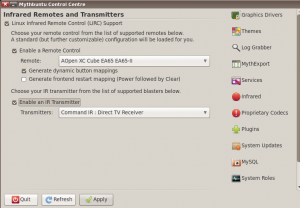 The control panel is a one-stop-shop for all option related to Frontend use, including setting up infrared and plugins

usually encoded to mpeg-4 format.  Encoding Blueray/HD content requires an HD tuner card (only works with unencrypted channels from your television service provider).  Most HD cable boxes support FireWire capture as an alternative to buying a dedicated Tuner card for HD.  The majority of tuner cards are PCI based so that old rig with all those PCI slots is perfect.  Minimum requirements from Myth’s website are 1.0 GHz CPU , 192 Mb of ram, and a TV Tuner Card.  HDD space is going to vary from user to user depending on how many recordings of “I Love Lucy” you plan on storing.  This effectively removes the need to keep a large ugly box next to your TV.  The backend can be stored anywhere there’s a cable jack and power. Mythtv software comes with the option of having many Backends (one master and other slaves) working on the same network to simplify storage and job management.  The software does all of this discreetly.

The Frontend is where all the functionality/customization comes in.  Aside from allowing the user to set and view recordings, the frontend can play movies stored on the backend, show weather alerts, find movie listings for your area, handle your music library, let the user surf the web and retrieve RSS feeds. 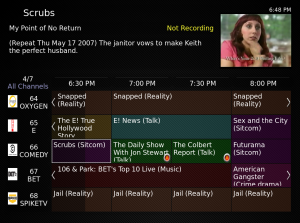 The TV guide is color coded by show genre and shows channel names, icons, and overview.

The frontend software is also compatible with IR remotes/blasters included and configured for the most popular remotes. The frontend can be run on the same node as the backend, or on a totally different setup.  Frontends can be outfitted with a DVD or Blue-Ray drive, adding the option to play your collection via disc.  The Frontend software adds the option to rip from a disc and add to a library stored on the backend.  Requirements for making a dedicated frontend here are also very minimal: the only storage needed is for the running software/OS and a compatible video card (1024×768 resolution minimum requirement.  Basically any modern video card).  All of these options are fully customizable depending on the user’s needs.  Since this software is run off of a PC instead of a manufactures special build, it is possible to tinker and perfect the setup instead of settling for whatever set-top box your cable provider sends you.   The Mythtv Frontend can also be replaced by XBMC and Sony’s PS3.  The only limit to the number of frontends is the limit of computers on the network

Setting up a Mythtv Frontend or Backend is very user friendly with the backend taking a few quick steps and the frontend needing only an IP address and password.  Mythtv can be installed as a bootable OS based off your favorite Linux flavor or as software onto an already working linux box.  Both have a GUI further adding to the ease of software setup.  The install software comes with all the display and tuner drivers needed so there is no driver hunting needed.

Do you have hardware sitting around holding the floor down?  Are you tired of fighting scheduling conflicts and deciding which favorite show to watch?  Check out Mythtv.  Give yourself the option to watch Whatever.  Whenever.  Wherever.