When trying to achieve flawless performance in the lag stream we call death, online gamers need to be aware of their options, especially those planning on building a positive rank to enter competitions. The router could be the difference between a Killing Spree and a Legendary kill streak. Of course given that the skillset is present. At some point we become bottle-necked between our personal growth in a competative game and the hardware we implicate between us and that satisfying click. 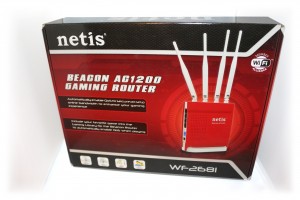 Introducing the Netis WR-2681 Gaming Router, capable of prioritizing data packets for gaming software first before other packets on the network. Combined with PC or Nic based prioritization on the local machine this allows for full throttle direct packet transfer between clicks and spell casts.

Contrary to popular belief opting in for a higher ISP plan with a higher transfer plan is not the solution to lag and other interruptions on the network. Luckily we are away from the dial up days where a phone call can disconnect a whole connection, however we are not away from the network traffic that can bog down the efficiency of the network. From a moviephile roomate to your sisters skype hangouts, these can drastically decrease the organization of the packets as they travel over the wires, that click could take a second lag time, and as professionals know even a .1 second is enough to turn the tides in the middle of a hostile gaming environments.

The Netis Router provides Qos packet prioritization, optimum software prioritization, and give access to the +5 network boost available now widely on the public market for routers. So lets take a look at the relative specs to this research:

As far as Netis goes this is their spec sheet for data transfer:

While the transfer rate may be questionable, this router again is meant to hold a connection efficiently without (many) dropped packets, so how did it do?

By simple math we can see the Success rate of the router is nearly 99.1% with a minuscule .9% drop rate (the command prompt rounds… this is why i like precise data…)

This test was run with normal usage of the system, streaming, video and audio, web browsing, and other connections like Live View Screencasting on my Airdroid app on my Venue (Very heavy on resources). All of this was run with basic setup and no prioritization as well as only two systems on the network with minimum noise outside of the regular usage.