Remove and Prevent Spyware, Malware, and Viruses Fast and Easy!

Malware and Spyware are not new and have in fact been around for several years. These kinds of software are starting to be seriously addressed by anti-virus companies but they cannot keep up.  Most users are infected by Malware and Spyware through one of five methods of transmission:

You hate it because it slows your computer down, it often costs you money to fix, and sometimes you lose your pictures, files, and data. Your computer is a very personal and you feel violated. The problem is you are not really sure how or when this occurred and you feel powerless to prevent it. It’s often embarrassing to admit that the violation occurred at all. I mean after all spyware, malware, and viruses all come from browsing the internet web sites or opening e-mails you shouldn’t right?

Now let’s talk about the facts and the power you have over your PC without spending your hard earned cash on needless software. Isn’t it time to slam the door in the face of this unwanted stuff?

The price tag on your PC does not account for all of the costs involved in owning that computer over its lifetime in your possession. Spyware, viruses, and Malware account for a major portion of total cost of ownership of a computer weather it’s an Apple or a PC. Losses by small, medium, and large businesses account for billions of dollars each year in the US alone. Among the most targeted environments are educational facilites which tend to have much more lax policies on computer use.

Over its lifetime a computer may need to be re-installed many times usually due to one of the above malady’s. Combating the threats of Spyware, Malware, and Viruses is big business and has led to a market full of professionals and software all dedicated to the removal and prevention of these problems. As we mentioned though, It is big business, and big business usually means big money. The cost for encountering one of these problems can often be more than the original purchase price of your computer, not to mention the loss of time and your data. One of the most often asked questions that an IT professional will receive in the line of work is: “What can I do to prevent a (Virus, Spyware, Malware) infection?  The answer: Nothing. That’s right, nothing. It is a matter of time before you will likely run into one of these bugs. Now all hope is not lost . . While there is nothing that you can do to totally PREVENT such a problem, there are several simple things you can do to radically reduce the threat these bugs pose and to squash them when and if they do pop up.  This short tutorial will give you all the information and basic tools you need to arm yourself against such problems. Spending 30 minutes with this guide can save your company thousands of dollars or put that cash back into your pocket instead of your local computer tech.

In the end the potential for infection is equal on all servers that are not well maintained and monitored. Ultimately porn websites continue to be a high risk as do many United States, Russian, Brazilian, and Chinese websites due to the large numbers of infected servers and websites in each. Much of the malware and spyware in circulation today stems from Chinese, Taiwanese, Brazilian, and Russian creators. The fact that the US comes in second place in most infected PC’s is due to the large number of online PC’s in the US and the relatively low technical level of expertise of the standard US user. Coming in first place in most infected computers is as expected China with over 1,095,000 confirmed infected PC’s. Remember, these are confirmed infections. Experts argue that the actual infected number could be 2 to 3 times as great  if that gives you any idea of the number of actual infected computers that exists.

Here is a quote from a recent INC. Magazine article on the subject:

In the last three months of 2009, about 1,095,000 computers in China were hacked, and 1,057,000 in the United States – this on top of the 10 million or so machines already infected in each country. An estimated $1 trillion in intellectual property was stolen worldwide in 2008 through hacking, McAfee estimated.

Malware and Spyware origins by country: 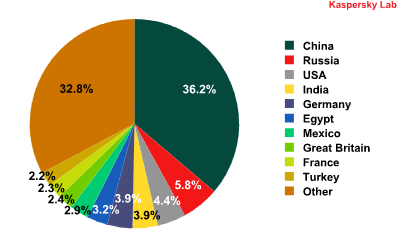