The AMD Radeon  HD 6950 has been out for nearly 7 months now, yet we are still seeing new releases with tweaks and minor changes. This fact really says something about AMD’s 6900 series. They are powerful cards capable of trading blows with Nvidia’s lineup while staying affordable. Sapphire builds off of the solid base of the 6950 with their DiRT 3 Edition card and make some much welcomed changes that really allow it to stand out. Sporting a custom PCB, a new dual fan cooler, 2GBs of RAM, and of course the bundled DiRT 3, the Sapphire HD 6950 DiRT 3 Edition proves that you can teach and old dog new tricks.

The SAPPHIRE HD 6950 Dirt3 Special Edition is a new SAPPHIRE original model with a special cooler using a new dual fan configuration. Based on the latest high end AMD GPU architecture, it boasts true DX 11 capability and the powerful configuration of 1408 stream processors and 88 texture processing units. With its clock speed of 800MHz for the core and 2GB of the latest GDDR5 memory running at 1250Mhz (5 Gb/sec effective), this model speeds through even the most demanding applications for a smooth and detail packed experience.
A Dual BIOS feature allows enthusiasts to experiment with alternative BIOS settings and performance can be further enhanced with the SAPPHIRE overclocking tool, TriXX, available as a free download from http://www.sapphiretech.com/ssc/TriXX/ 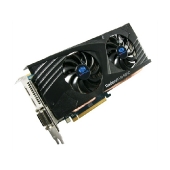