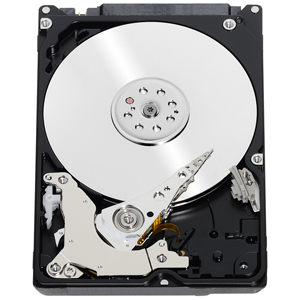 Data makes the world go ’round. This is a simple truth – everything we do that makes it worth owning a computer either generates data, acts upon data, or makes use of data. The more you want to be able to do, the more data it involves. Just because we need, or work with, or generate data doesn’t mean we have the time to go home to make use of a big computer with a big stack of big drives however. Professional video-editors are one of the worst hit by this phenomenon; working in the field with uncompressed, high-definition video requires not only copious storage, but fast copious storage, if they expect to earn their paycheck. Even if you don’t make a living shoving bits around, lots of people now have need of fast, vast storage, even if they are notebook users. Western Digital has risen to the challenge and offered a solution in the form of their Scorpio Black series of laptop hard drives. They offer huge capacities, with significantly improved read-write speeds over the conventional “big laptop drive” that operates at 5400 RPM at a fairly negligable premium.

While I couldn’t fit all of this into the table, this drive once again draws less current than the OEM drive it replaces. According to the press release’s spec sheet, it requires more power during startups and shutdowns when the motherboard is not communicating power management to the disk, but these take a couple seconds and happen infrequently. I will be perfectly happy to shave off whatever fractions of a watt I can during normal operation even at the cost of a more power-hungry bootup, and I suspect that more than 99% of potential customers would be happy to make that same tradeoff. You can have a look at the spec sheet here and decide for yourself if normal power-draw levels are to your satisfaction – they certainly are to me.