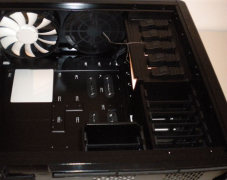 The last key component in any computer is the chassis, or case. The chassis provides the framework that all of your other components are going to be bolted to; it transforms a collection of circuit boards, cables and heatsinks into a finished computer. In general, you’re free to spend as much or as little as you want on this, but there are a few important considerations to keep in mind:

Size – Obviously, your case has to be big enough to hold all the stuff you want to put into it. Some enthusiast motherboards are longer front-to-back than the ATX spec will strictly allow; make sure the motherboard area has enough clearance if yours is one of these. If you picked an Extended ATX board, obviously you’ll need a case that has the clearance (and the extra standoffs) for that. If you have a long video card, you’ll need to be sure the case has enough clearance front-to-back to accommodate it. Multiple hard drives will need space, not only for the drives themselves but for airflow between them. 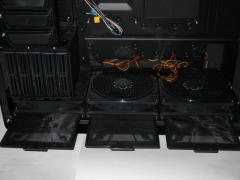 Airflow – A modern gaming PC can put out a shocking amount of heat under load, and the vast majority of these are air-cooled. This means that you’ll need to pay attention to the airflow inside the case. There are a number of factors that feed into this, but the most obvious are what I call the Three F’s of Airflow: Fans, Friction and Free space.

Fans – With fans, size really does matter. Larger fans with more, wider blades have more surface area, and thus can move more air at a given speed. How many fans your case can accommodate, and what size, will determine an upper limit on how much air can be pushed through your system. At a bare minimum, you want one intake fan and one exhaust fan in your case, no less than 120mm wide. Obviously, the more hot components you stuff into your system, the more airflow you’ll want.

Friction – This one is all about clutter. In general, air flows more freely when there are few or no obstructions along its path. This is where those sleeved, modular cables on the power supply come into play. A sleeved power cable presents a smooth surface for the air to flow around. Modular power supplies let you use only as many cables as you actually need to power your components—any decent power supply will give you far more cables than you need. Data cables can also provide an obstruction, though the nearly-universal use of SATA for storage devices makes this much less of a challenge than in the bad old days of IDE and SCSI. The best situation, though, is one where there’s no obstruction at all. Better cases will provide channels for you to run your cables behind the motherboard tray, where they’re not going to interfere with airflow. Some will even give you zip-ties to bundle cables together and tie them down.

Free space – Hot components need space around them for air to flow, or they’ll overheat. Most cases are good about providing room for the CPU and GPU to breathe, but hard drives are an often-overlooked component. In general, the more space you have around the top and bottom of each drive, the better off you’ll be—though you can cheat a bit by putting a high-flow intake fan right in front of them to help. 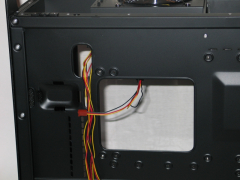 Other features – This is the area where the high-end cases really distinguish themselves from the cheaper ones. Tool-less retention systems for the 3.5″ and 5.25″ drive bays can make it easier to put your system together, though beware the flimsy ones that won’t hold your drives securely. A motherboard tray cut-out will let you get at the CPU cooler backplate without dismounting the motherboard—helpful for the frequent tweaker. Some cases even put the whole motherboard tray on a sliding rail, which lets you remove it from the system entirely for installation and service. Cable management is another area in which you’ll find wide variance; the best cases let you route all data and power cables behind the motherboard tray, where their impact on airflow is minimal. Front panel ports are helpful for day-to-day use of the system. Even minor things like thumbscrews can help to make getting your system assembled much easier.

Hopefully by now, you’ve seen how these components are important to the health and well-being of your computer. Stay tuned for part 3, where we go into the steps for turning your pile of parts into a finished system.