The 6.1mm body isn’t the only eye catcher. The machined aluminum back has three cameras that are all part of the new Intel® RealSense™ Snapshot Depth Camera & Dell Gallery. Its a sharp-edged tablet, with tiny borders around three of the edges and a thick bottom speaker that dons the 2MP front-facing camera. Yes the front facing camera is at the bottom, and that does in-fact make it difficult to video chat with other people since you have to either hold the tablet angled towards your face or flip it upside-down. 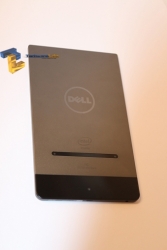 The slim frame is stunning, but it doesn’t beat the rivals. Its only half a millimeter slimmer than the Samsung Galaxy Tab S 8.4 and only 1mm slimmer than the current iPad Mini. Its a nice difference if you consider what had to be done to get there, but is it worth the price tag and does it actually make the difference in today’s power-driven tablet usage?

The Venue is less impressive when it comes to the weight. Coming at 305g its lighter than the iPad Mini 3 (311g), but the Google’s Nexus 7 and Samsung’s Galaxy Tab S 8.4 are both lighter than the Venue.

The next issue we ran into is the three cameras located on the back-side of the tablet. Our hands would block the camera and while the Intel® RealSense™ warned us of the obtrusive fingers/hands we still found it annoying to have to position our hands in very awkward places to take a quick shot.

While the tablet is the thinnest in the world, its definitely not the most ergonomic or comfortable to hold for long periods of time. Due to being sharp-edged it digs into your hand as you hold it, and if you try to move your hand to get a more suitable position you are bound to click on the screen accidentally. 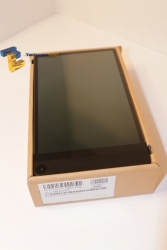 The large bottom that houses the speaker is also a two-faced coin that has a benefit of being wide enough to hold but too long from the base of the display that you would have to use your other hand to reach for the screen during gaming.
Though the issue is very small and can be dealt with, its not the only one. The power and volume buttons while smooth and very responsive can be obtrusive in landscape mode.
During our testing and using of the tablet we didn’t find it to be too much of an issue, but when you get to play with it for more than 3 hours a day, you might find that its not as comfortable as you’d like it to be.

The Venue’s 8.4-inch panel has a powerful 359PPI, 2560×1600 resolution. These numbers rival the new Nexus 8, and Samsung Galaxy Tab S. The density numbers aren’t just simple numbers, they allow you to have even more real-estate than you would have if it had an HD 1080p display. 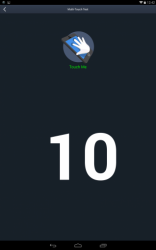 The AMOLED panel allows for very vivid and sharp blacks, and a perfect contrast. Films and images look stunning with fantastic colors and proper brightness.
The mighty little tablet pumps out a fantastic performance during gaming sessions and with the viewing angles to be excellent and having a decent brightness for outside and indoors.
Though its not the perfect display, the problems are few and minor. The glossy screen which is presented in most tablets and rivals and the minor yellow tint added to the whites.

The stereo speakers allow for a wonderful viewing experience for those of us on the go needing to watch the next season of Game of Thrones on the ride to work. With the top-end that is clear and well balanced, and a bass that has a decent thump to it without snapping or crunching like you would expect a poor speaker to.

The only problem I have encountered and others have reported is the poor positioning of the speakers in landscape mode makes it so that the entirety of your sound comes out of one side (depending on your orientation might be left/right.) This also leads to the tablets software flaw that makes it so the left and right while in portrait mode are in their proper places, but when you tilt the tablet into portrait the orientation goes into top being the right and bottom being left, which at first was a little hard to get used to but with time we made it work.