As many of you know, recently Seagate released one of the largest consumer drives on the market: the Seagate Barracuda 7200.11 ST31500341AS . The drive’s capacity is 1.5 TB (1500 GB) or approximately 1.397 TB. The drive specifications are decent and Seagate itself announced that this drive will be able to handle 120 MB/sec sustained transfer rate. All of us know that these rates will not be across the whole drive and were most likely obtained under the best possible conditions. That being said, we still can not overlook the fact that a 1.5 TB drive’s speeds place it directly in the Velociraptor territory. After discovering this astonishing speeds people normally bust out their Western Digital Velociraptor drives and start benchmarking them for comparison. So, what do they get? Velociraptor obviously wins in all categories – max speed, min speed, average speed, access time, you name it and it wins it. At this point they label the Seagate drive as second best and close the case. Of course thats the point, the Seagate drive was not meant to compete with the Velociraptor which is a performance drive and is instead targeted towards good performance and high storage capacity. So end of story right? . . . What if I told you there was a way to modify the 1.5TB Seagate to unleash the hidden beast within. . .

I decided to take the matters a step further. The WD Velociraptor is the largest “Raptor” class drive available on the market with the capacity of 300 GB. Despite the fact that it is the largest out of the lot, you still have a 300 GB drive compete against a drive that is basically five times its size. Normally, the giant will not stand a fighting chance, (look up David and Goliath if you don’t believe me) so I decided to even the fight out a little. What kind of speeds would you get if you were to take the large drive and downsize to the size of the Velociraptor? I decided to find out.

Though really in this case we are not going to open up the drive, flash the firmware, or do cutting of any kind.

What we did to the 1.5 TB hard drive was to shrink it. There are a 5 easy steps you have to follow in order to accomplish that.

2. Burn the ISO onto a blank CD using any standard CD burner.

3. Put the burned CD into the CD-Drive and restart your computer.

4. The CD will boot automatically into the software’s graphical interface at which point you must click “ACCEPT” to the licence agreement.

6. Go to the “Advanced Tools” tab and select the “Set Capacity Manually” option.

8. The confirmation message should look like the screenshot below. Once you achieved the confirmation, you are done. You can take out the CD and press the reset button or click “CTRL + ALT + DEL” to restart your computer. 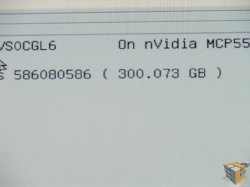 **Note: The “Set Capacity Manually” only accepts LBA number so if you put something like “300 GB”, the software will set the size to zero and you will have to shut down the computer, restart and put the correct number into the Box. Also, after the capacity has been set, the software can not alter the size unless you completely Shut Down your computer, a simple Reset will not work.

After you set the size less than the maximum capacity, the remaining space will be invisible to the system and thus rendered useless. (If you downsize the 1500 GB drive to 300 GB, the other 1200 GB would be invisible) The drive will effectively become 300 GB in size.

Now I can hear you all screaming “What happened to 1.2TB worth of my drive space?” As I mentioned the drive is now a 300GB drive for all purposes. Look at it this way, the 300GB Western Digital Velociraptor is approximately ~$229 while the price of the Seagate 1.5TB drive is approximately ~$119 at the time of this writing. Now what you end up with is a drive that is higher in performance in all regards except seek times at a lower cost per GB. We are all about getting more for less around here. The added benefit is that you can always go back and reclaim that 1.2TB at any time, try to expand the Velociraptor at a later date (good luck).